Still having an amazing time in Stratford. We have been learning persuasive acting and are going to try it out at home this week end! Bill from the Dreamshed Theatre brought in some giant props actually used in the performance of The Borrowers. We then had to use our imagination to pass around a circle some invisible props this is not as easy as it might sound.

After luch we had an amazing lady called Jackie who is a voice coach with the Royal Shakespeare Theatre and also worked with the actors on the film of the War Horse! She has taught us amazing voice projection skills.

In our oscar winning performance tonight  Joel really scared the audience when he miraculously appeared !!

Finlay would like to say it has been the best day . Harry says it has been an awsome experience.

Off to Charlcote Park tomorrow, then back to school after lunch. 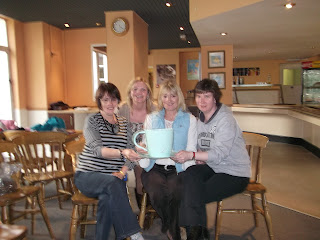 We were really thirsty so we thought we would have a cup of tea!

From all in 4CJ
Posted by Shavington Primary School at Thursday, March 22, 2012
Email ThisBlogThis!Share to TwitterShare to FacebookShare to Pinterest

Wow jack you are having a fab time, can't wait to see those new acting skills. Enjoy tomorrow and see you in the afternoon. Love mum, dad and meg x

having a amaizing time in stratford I hope you all get back safe.xxx