On the last day of term we had a Royal Street Party to celebrate the wedding of Prince William and Kate Middleton.  Everyone really got into the spirit and we had bunting around the playground, decorated tables with Union Flag serviettes and flags and a long table that seated about 180 children.  There were lots of sandwiches and delicious cakes, which were kindly donated to us by Parents, Carers and Grandparents.
Before the event took place each class dressed a girl up as a bride.  The only materials we could use were 4 white bin bags, some doyleys and a roll of white toilet paper.  The brides were paraded around the long tables, to the ‘Bridal March’ echoing from the speakers.  There were some very imaginative dresses and they all looked spectacular.
After the food was devoured we had a giant game of ‘pass the parcel’.  Six parcels were passed around and the winning prizes were commerative mugs.  A great keepsake to remember the event.
The climax to our street party was a replica wedding of the Royal Event.  Louis Stannard and Poppy Slater were our Bride and Groom and Ava Bloss was their Bridesmaid.  They would have given Wills and Kate a run for their money as they looked absolutely wonderful in their full wedding outfits.  Poppy was wearing a beautiful lace wedding dress with a full veil and Louis looked handsome in his morning suit and top hat.  Ava completed the occasion with a maroon full-skirted bridesmaid dress.  The ‘Bridal March’ was played as they paraded around the playground.  Everyone waited in anticipation for that ‘first kiss’ and they didn’t disappoint the crowds.  All that was left was for them to cut the cake.  This was kindly donated to the school by Annalise Rowe’s Grandma and we are very grateful for her generosity.
The day finally ended with a rendition of ‘God Save The Queen’, where everyone stood up to sing!
A fantastic afternoon, which was enjoyed by everyone and a big thank you to those people who helped to make it a great event. 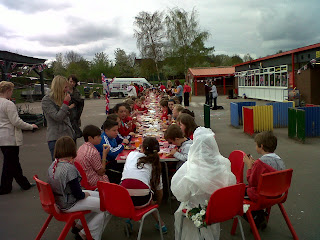 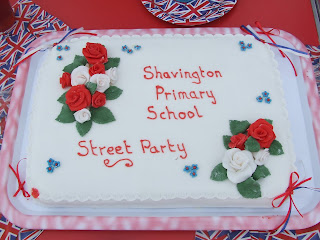 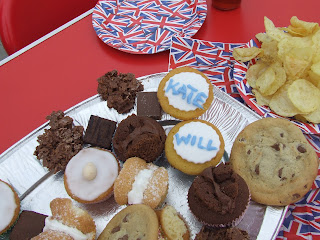 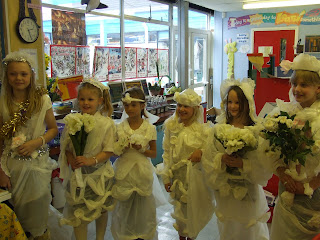 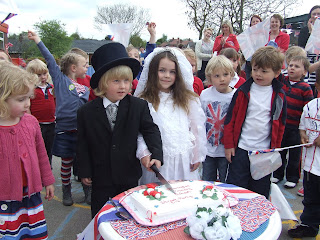 Posted by Shavington Primary School at Thursday, May 05, 2011
Email ThisBlogThis!Share to TwitterShare to FacebookShare to Pinterest